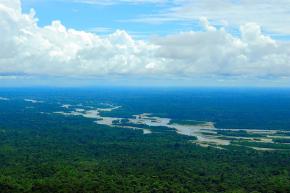 Peru’s Manu National Park is in the southwestern corner of the vast Amazon basin. It can be reached from Cusco, the former Inka Capital. Manu makes a perfect combination with a visit to the Inka Citadel Machu Picchu, one of the Wonders of the World. Its limits are reached from Cusco after about 4 hours by car down the Manu Road, but then it will still take you an additional 2 days by car and boat to get to its most pristine heart in Manu’s Reserved Zone.

The vegetation of Manu:

This enormous and well protected park starts with the scarce vegetation of the Andean Puna Grasslands at 4200m above sea level, but vegetation gets bigger in dimension and also denser going down the eastern Andean slope. You pass Elfin Forest, Cloud Forest to reach as low as 350m above sea level of the Lowland Amazon Rainforest with trees as high as 50 meters or more.

Elfin Forest, with its tiny trees, is the highest limit for both the Andean Spectacled Bear and the majestic Jaguar, and already has a longer bird list, among which the Blue-banded Toucanet, Golden-headed Quetzal, Marcapata Spinetail, Red-and-white Antpitta, Barred Fruiteater etc.

The Cloud Forest trees are somewhat bigger, up to 10-15 meters, and covered with mosses, lichens and bromeliads. Here we can already find three species of monkey, the Woolly Monkey, the Brown Capuchin and the White-fronted Capuchin Monkey. The Cloud Forest birds have incredible members, such as the Andean Cock of the Rock, the Umbrella Bird and the Crested Quetzal. There are many tanagers and hummingbirds plus Versicoloured Barbet, Highland Motmot and Green Jay. This is a good altitude (apr. 1600m) for butterflies, including members of the Skipper, Daggerwing and Sulphur families.

The Lowland Amazon Rainforest is one of Earth’s most complex and fascinating ecosystems. Just standing in the middle of the forest trying to figure out where plants begin and end and with what other plants and animals they interact is a challenge. Nothing is simple or straightforward in this environment. This entanglement holds about 800 bird species (of the total of 1000 of Manu) and almost all of the 200 mammal species.

The lowland forest is monkey territory, and here you can see their biggest South American representatives: the Black Spider Monkeys and the Woolly Monkeys in healthy populations, interacting with each other, but also with you. The tiniest monkey is the Pygmy Marmoset, or “pocket monkey” and there is also the only nocturnal monkey on Earth, the Night Monkey or Douroucouli. You can also see other mammals in the forest, but you never know if that will be a raccoon, such as the Coati, or a weasel, such as the Tayra. Or maybe even the Southern Tamadua, which is an anteater, or one of those wild cats as Ocelot or Margay. The forest birds include Razor-billed Curassow, Spectacled Owl, Amazonian Pygmy-Owl, Cream-coloured Woodpecker, Pavonine Quetzal, Black-spotted Bare-eye, Gouldi’s Antbird, Rufous-fronted Antthrush, Spangled Cotinga, Musician Wren, Casqued Oropendola, Opal-crowned Tanager. Among the butterflies, the Riodinids, Nymphalids and Satyrids are particularly prolific here.

Along the banks of the river, or even swimming in the middle of the river to reach the other shore, you can see Capybara, the biggest rodent on Earth, or maybe peccaries, deer, Tayra and even Howler Monkeys. After a cold spell, jaguars love to warm up in the first sun rays on the beaches. The river bird species include Roseate Spoonbill, the enormous Jabiru, Horned-Screamer, Osprey and Black Skimmer. If river conditions are suitable we will look out for butterflies imbibing moisture from sandbanks, or even turtle eyes. Sometimes these aggregations can run into many hundreds of individuals – a beautiful sight.

The lakes are Giant Otter and Black Caiman territory, both large animals on the verge of extinction due to habitat destruction. On the lakes you always see the Hoatzin “punk bird”, Moscovy Duck, Neotropical Cormorant and Snake Bird, among many others.

The claylicks, “collpas” give you a spectacle of sevral parakeet, parrot and macaw species, among which the Tui Parakeet, White-Eyed Parakeet, Blue-Headed Parrot, Orange-Cheeked Parrot, Red-and-Green- and Scarlet Macaw.

History of the park

For long, Manu was populated by indigenous peoples, who found various and ingenious ways to survive in its beautiful but hostile environment. After Spanish conquest of South America, mission posts and big “tropical haciendas” (farming communities led by colonists and worked by indigenous people) were the first outside organizations to meddle in Manu’s daily life.

In the 70’s of the last century, Manu was established as a National Park by the Peruvian Government. The National Park status is the only one in this country that gives nature 100% protection, so this was an important moment for Manu’s future. A couple of years later it was first included in UNESCO´s Man and the Biosphere (MAB) Programme and in 1987 it was acknowledged as a "World Heritage Site". Manu is internationally acclaimed as one of the most biodiverse areas on Earth.

Manu National Park and Manu Biosphere Reserve, what is the difference?