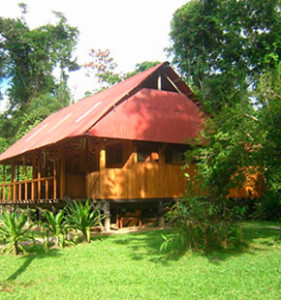 You can reach Pantiacolla Lodge from Cusco in a 2-day expedition by car and boat down the Andes. There are 3 bungalows of 2 rooms each with private bathrooms, 1 bungalow of 3 rooms with private bathrooms and 1 bungalow of 2 rooms with shared bathrooms. The lounge exhibits many remains of animals found in the forest around Pantiacolla and also ancient pottery brought in by the explorers looking for the lost city El Paititi in the Pantiacolla Mountain Range. We use candles for lighting in the rooms; however, we use solar panels for lighting in the lounge and to recharge your batteries. Temperatures are between 28C (82F) during the day and 20C (68F) at night. Between May and July, the temperature may drop to 18C (64F) during the day and 10C (50F) at night for a couple of days each month. One of the lodge’s many virtues is to have very few biting insects!

It has 900 hectares of surrounding forest, extending from 350 to 1200m above sea level. There are 8 species of monkey, among which the rare Monk Saki Monkey and the only nocturnal monkey on Earth, the Douroucouli. You can find both Collared- and White-Lipped Peccaries in healthy populations roaming the lodge’s extensive trail system. There is Coati, Tayra, several deer species and cats like the Puma, Ocelot and the smaller Margay.

What you can do there

It will take you a couple of days to hike the over 26 kilometers of trail surrounding the lodge. The trails take you through the different forest types; the longest of 6 km goes up to 920m above sea level into isolated cloud forest, giving you an impressive view of the Andean Mountain Range. Closer by the lodge, at about 2 hours hiking, you can visit the Petroleo Stream.  You will believe you are in a scene of Jurassic Park, with palm trees, tree fern trees, enormous rocks, waterfalls, swimming pools etc. The Monk Saki Trail, at intermediate altitude, gives you a chance of viewing this rare monkey species. The Capybara- and Tinnamou Trails down from Pantiacolla Lodge are at about 350m above sea level, where you find the highest wildlife diversity, especially for monkeys and birds. The Sajino Trail makes a loop around Ranacocha, Frog Lake, which is a small lake surrounded by hundreds of frogs. Nearby, 10 minutes by boat, you can visit a clay lick where many parakeet and parrot species eat clay in the mornings. Also the smaller macaws as the Chestnut-fronted and the very rare Blue-hooded Macaws can be found there early in the morning.
You can swim or fish in the alto Madre de Dios River and you can make bonfires on the beach at night. Upon request, we can invite the Harakmbut Indians from Shintuya for them to show you their intriguing and ingenious rainforest culture.
Pantiacolla Lodge is the most convenient place for student courses, it is comfortable for jungle exploration by families with small children and also serves as base camp for explorers looking for the lost city El Paititi.

Pantiacolla is a beautiful and comfortable lodge on the enigmatic frontier between the Andes and the Amazon, from where mountainous and lowland rain forests are within your reach.